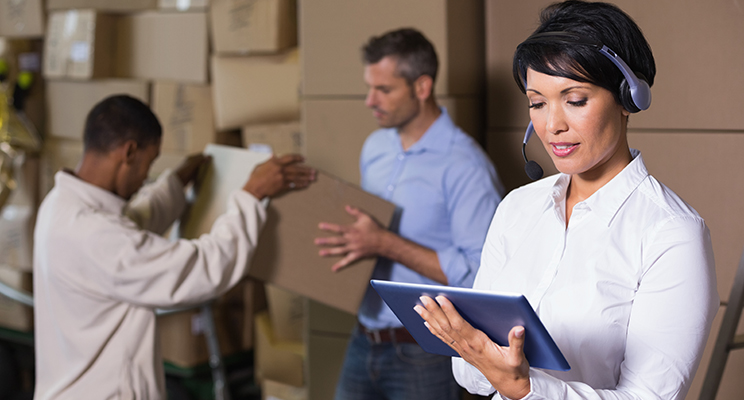 If you manage people, you may sometimes struggle with the very tough job of getting top performance from the people you manage. Since you need to get results through others, you need to build relationships in which people are motivated and engaged while at the same time holding them accountable to achieve results. These relationships are probably the most challenging and important parts of being a manager.

This is not a new concept in the management research arena. In the 1940s, research in leadership started to analyze the effects of two types of leadership behaviors: Those that were predominantly task-oriented and others that were predominantly relationship-oriented (Forsyth, Donelson). Task-oriented leadership focuses on tasks that need to be performed in order to meet certain goals or standards. Relationship-oriented leadership focuses on the satisfaction, motivation, and the general well-being of team members.

The table below compares task-oriented and relationship-oriented leadership styles [1]: 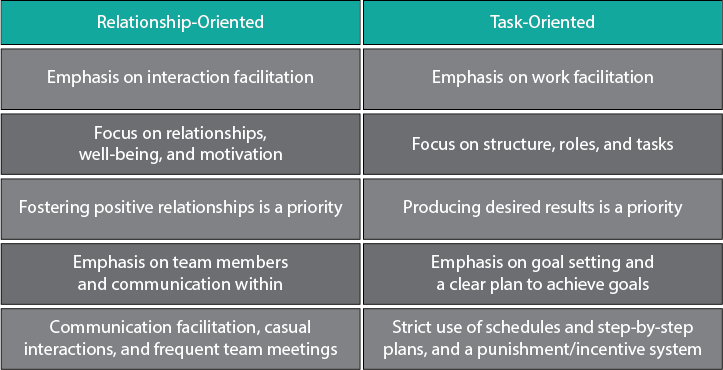 Top performers often leave organizations because poor performers are not held accountable. They resent others getting away with underperforming. These top performers also tend to leave managers who lack relationship orientation. Managers must enforce objectives while at the same time build strong relationships with people. Furthermore, they must hold employees accountable for results while constructively taking action when this is not happening.

More recently, Kim Scott, author of Radical Candor: Be a Kick-ass Boss without Losing Your Humanity, talks about this difficult but very necessary part of being a manager. She explains the vicious cycle that can result when a manager doesn't want to enforce.

"For every piece of subpar work that you accept, for every missed deadline you let slip, you begin to feel resentment and then anger. You no longer think the work is bad; you think the person is bad. This makes it harder to have an even-keel conversation. You start to avoid talking to the person at all." P. xi

Scott encourages managers to deliver tough feedback, while at the same time care personally by establishing strong relationships with the people they manage. 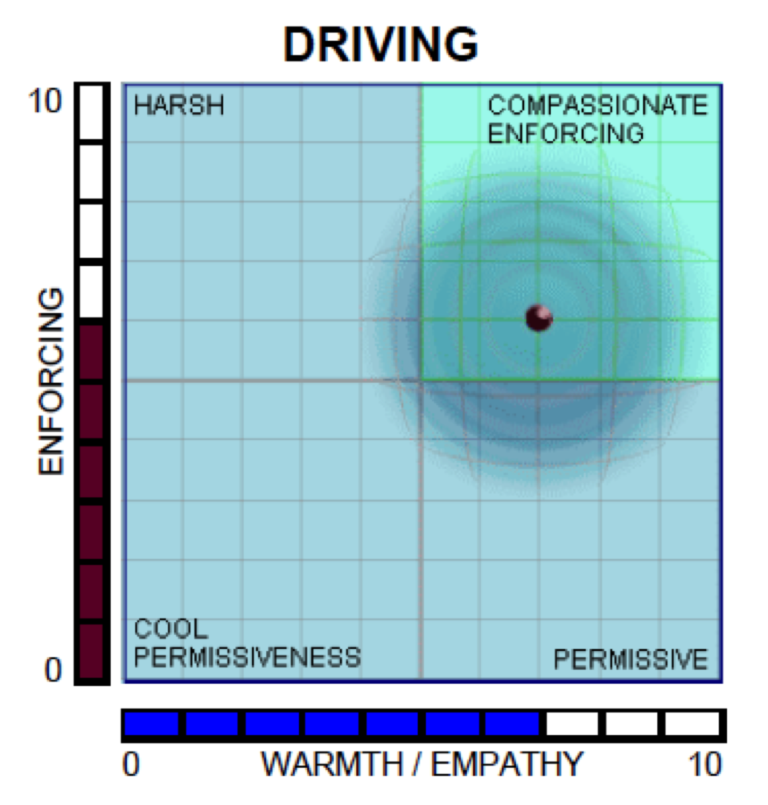 Harrison Assessments provides a deep insight into a leader's behavioral tendencies by revealing the relationship between paradoxical traits. One of the twelve paradoxical behaviors is called the Driving Paradox, and it indicates how the manager drives results. It illustrates how these two paradoxical tendencies combine to reveal a leader's impact on the organization. Harrison Assessments uses "Enforcing" to refer to task orientation in which you hold others accountable. The relationship orientation in which you build relationships is referred to as "Warmth/Empathy." See the Paradox graph on the right.

"Warmth/Empathy" is the tendency to express positive feelings and affinity towards others.

"Enforcing" is the tendency to enforce rules and hold others accountable. 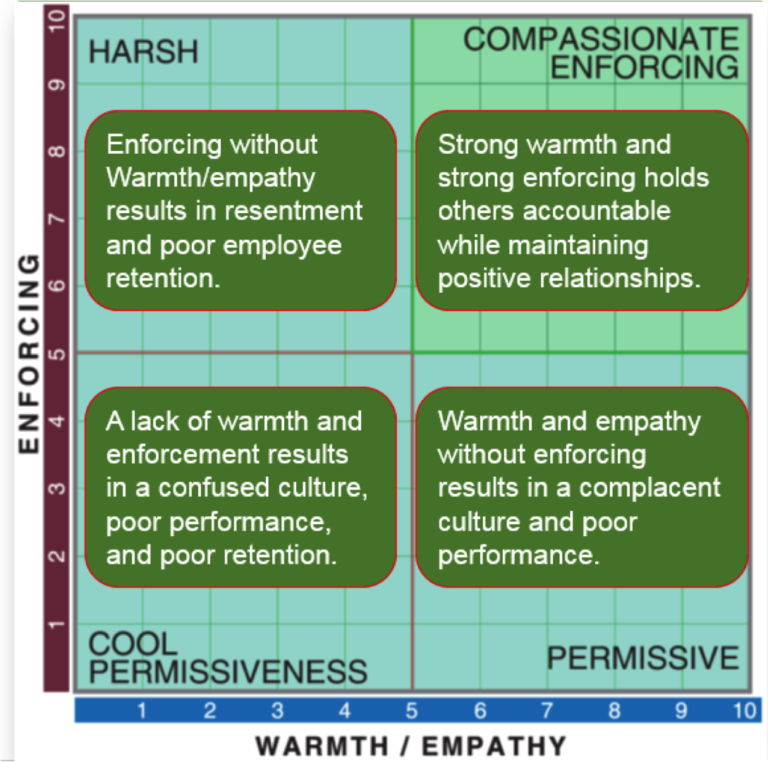 Harrison Paradoxes are composed of both a gentle trait and a dynamic trait. In our example paradox, "Warmth/Empathy" (horizontal axis) is the gentle trait and "Enforcing" (vertical axis) is the dynamic trait. In Harrison Paradox Theory, paradoxical traits such as "Warmth/Empathy" and "Enforcing" become a great strength when synergized. When a manager is strong in both tendencies, they are capable of guiding others to succeed. A manager who is both warm and empathetic as well as willing to correct others due to underperformance has a big advantage over another who tends towards one side of the paradox. In Harrison systems, having both of these positive traits is referred to as "Compassionate Enforcing" as it represents the balance and versatility of a great manager. Effective managers are only found in the upper right quadrant (green area) of the Paradox graph. The other three quadrants each signify behaviors that hinder successful management.

There are enormous benefits for managers and their staff when they can operate out of the "Compassionate Enforcing" quadrant. When people both trust and believe you care about them, they are much more likely to accept and act on your feedback while focusing on getting results.

Here's how managers in each of the quadrants on the Driving Paradox (example graph above) might respond to the same situation:

One of the employees, Martha, has a problem with being punctual. She often shows up late for meetings even though she has received feedback from her manager about the problem. Today is the weekly staff meeting, and it is time to begin, but Martha is not there. She walks into the meeting 15 minutes late.

How might a manager who is a "Compassionate Enforcer" respond? Although there is a range of possible responses, the manager might carry on with the meeting, but as soon as the meeting is over, ask Martha to stay. Once the room is clear, the manager might ask Martha what happened. This approach enables the manager to make sure there wasn't some serious problem, such as an emergency or an urgent client problem taking priority. However, if Martha provides a typical excuse, such as traffic problems, the manager might say something like "While I can understand that traffic is pretty bad in the morning, it is essential that you leave early enough to make the meetings on time. Your lack of punctuality is a pattern which tells me you are not managing your time effectively. Since this often happens, I think it is not due to some unusual circumstance. Your input is important for these meetings, and it holds back the group when you are late. I want you to succeed in our company. However, since we have discussed this before, more than once, I will now give you a written warning. My intention is to highlight the importance of this issue. Your performance is generally good but this area needs improvement." 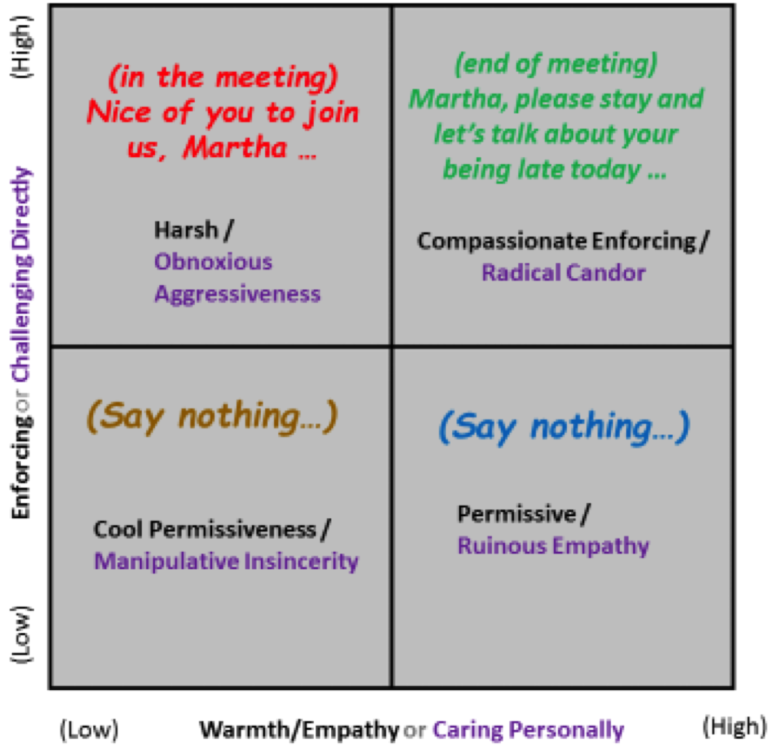 A manager who tends to be in the "Harsh" quadrant (upper left) might say something sarcastic or scold Martha in front of the group. They might even do this before asking her what happened. In this case, the manager assumes that there is no legitimate excuse and uses the situation to vent frustration. This approach is likely to alienate Martha and damage the relationship between her and the manager. Furthermore, it has the added unintended consequence of communicating to others in the group that the manager is not fair and/or over-reacts to situations. The manager may assume that this approach shows everyone that being punctual is important. However, it can also cause unintended consequences, such as employees neglecting important client emergencies to come to meetings to avoid being scolded. A "Harsh" manager will tend to create rules and expectations directed toward the poor performers. In doing so, there is a significant chance that the better performers will not be happy with such treatment and seek employment elsewhere. The final effect is that it will create great losses for the company.

Managers who are "Permissive" (lower right) may avoid saying anything after the meeting. They may become focused on another issue and neglect to deal with the problem. If a "Permissive" manager does discuss the problem with Martha, they are more likely to accept excuses without exploring or challenging them – at least for a while. This permissive tendency can easily cause others in the group to become complacent. They may even begin to believe that the meetings don't start on time, so they come a few minutes later when "it really starts." Permissive managers also have a flip side in which their excessive tolerance is finally overcome with frustration. When such an event occurs, they may become aggressive and scold Martha, embarrass her in front of the group, or even terminate her without sufficient warning. This over-reaction could even lead to a potential lawsuit.

Some managers not only shy away from enforcing, but they also lack warmth and empathy. In the Harrison System, this is referred to as "Cool Permissiveness" (lower left). Managers in this quadrant may simply avoid the whole issue by letting Martha come in late without saying anything. The manager's attitude might be "If Martha wants to get a poor performance review this year, it is up to her." The manager doesn't want to deal with the potential confrontation while at the same time doesn't care about Martha or her career. This behavior is potentially the worst response as it neglects the core aspect of the manager's job.

If you find yourself tending towards any of these lesser productive behaviors, is all hope lost? No, the Harrison system tells us that behavior is a choice and we can always make the conscious decision to develop new behaviors and increase our skills.

If you are low on "Warmth/Empathy" you can build this capacity by taking the time to understand and acknowledge others' strong points. It's about truly listening and responding with genuine concern and care for each person. It is about guiding people to be successful in their career. It is not about remembering birthdays or asking about everyone's weekend each Monday morning.

If you are low on "Enforcing" you can learn to guide people to do their best. The reason this synergizes well with "Warmth/Empathy" is that you first have to acknowledge what an individual is doing well. Then you can encourage them to stretch into areas that they have not reached before. It is essential to recognize and acknowledge any progress. This behavior demonstrates that you see and appreciate their efforts to improve. When giving corrective feedback, focus on what needs to be done rather than what is wrong.

A manager's job is to achieve results through other people. To do this, others need to be engaged, empowered, and guided to accomplish those results. Since managers are not usually directly involved in the details of implementation, their employees will have a better understanding of the issues that need to be faced to achieve the desired results. The manager needs to take the time to listen to their views and explore their challenges. Once all the issues and options are clear, an effective manager can choose to accept the views and proposed direction of the employees or debate the best solution. The manager needs to have the discretion to know when to accept their views and when to allow for "learning" mistakes, when to continue persuading, and when to insist on a course correction. "Compassionate Enforcers" are initially receptive to understanding and listening, then move to brainstorming, and when necessary they debate or give course corrections.

The relationships with those that report directly to you have an enormous impact on the results your team achieves and these relationships ripple down into the organization to the people they manage. Consequently, your behaviors can either generate a constructive or a destructive office culture. If you are a manager, there is nothing more important than building relationships while at the same time guiding others to succeed.

[1] Relationship-Oriented vs. Task-Oriented. Adapted from West meets East: A stort of American and Korean Engineers by P. Duran on Slideshare, 2016, Retrieved from https://www.slideshare.net/paulinaduranmiranda/west-meets-east-a-stort-of-american-and-korean-engineers on Sept 6, 2017.

Curious to know more?
Get in touch for a free demo.